Belieb it or not, Justin Bieber may not be so bad after all.

Despite the not so smart things Justin has done in the past, I think it’s important to remember that he is a young man who was given a lot of power, wealth, and fame at an early age. Imagine what those things can do to the ego of a young mind.

Justin recently cancelled the “meet and greet” portion of his show and fans are outraged…but here’s why:

“I enjoy meeting such incredible people but I end up feeling so drained and filled with so much of other people’s spiritual energy that I end up so drained and unhappy. I  want to make people smile and happy but not at my expense and I always leave feeling mentally and emotionally exhausted to the point of depression .The pressure of meeting people’s expectations of what I’m supposed to be is so much for me to handle and a lot on my shoulders.”-Justin Bieber 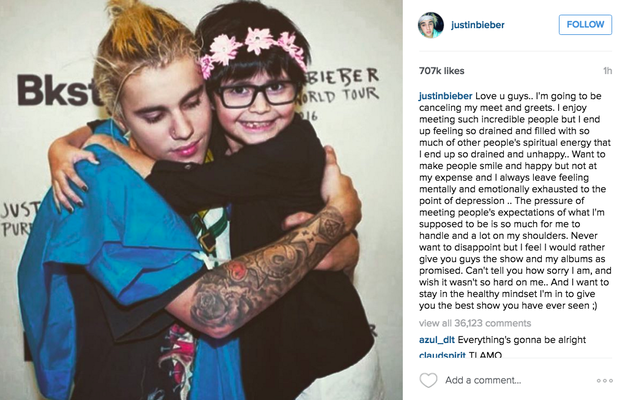 The world is becoming more conscious minded…and Justin’s generation is waking up even earlier than previous generations. Could it be that these young minds don’t know what it is they are feeling or what to do with it?

As an empath, I completely understand what Justin is feeling, but does he?

We must support each other as a whole because we’re all in this together.

Justin’s film, “Believe” received very low ratings on sites like IMDB but when I watched the trailer, I saw a raw human being. Raw is not always pretty, but raw is truthful.