It’s no secret that Keanu Reeves is a good guy. He’s a low-key real-life hero who runs a private foundation in aid of cancer research and children’s hospitals, profoundly down to earth, giving the crew of The Matrix sequel over $40 Million.

He also seemingly doesn’t do it for the fame and on when referring to The Matrix ancillary profits, he said,“I’d rather people didn’t know that. It was a private transaction. It was something I could afford to do, a worthwhile thing to do.”

The 54 year old’s latest revelation may come as a surprise, with a heart of gold and such a down-to-earth demeanor – he’s actually a rather lonely guy. Which he admitted in an interview with the Jakarta Post.

Read the interview below.

Obviously The Matrix means a lot to you. How much like Neo are you?

He’s a better man than me but I try to live up to his values.

Which of his qualities do you particularly admire?

He was a beautiful man to play. I thought his love for Trinity was so pure. I really identified with it. Also I loved his search for answers. He’s a strong positive, moral, and ethical man, doing the best he can. What does love mean to you?

You mean romantic love? You know, I’m the lonely guy. I don’t have anyone in my life. But if it does occur, I would respect and love the other person; hopefully it’ll happen for me.

You describe yourself as a lonely guy. Are you content with that?

I don’t concern myself with it that much. I’m an actor, so in terms of what you’re asking about, I have no answer.

You live in West Hollywood. Do people there respect your privacy? Can you walk around unnoticed?

My days are pretty normal. Of course there’s the tourist vans, they visit everybody’s homes. I come out in the morning and get my newspaper, and you’ll see them.

Sometimes you feel like an animal in a cage. But in Los Angeles, no one cares.

There’re definitely paparazzi chasing after you, but I don’t go out much, I don’t really do anything. I’m pretty boring.

You’re known for your passion for motorbikes. What do you like about it?

So much. I like the aesthetics of a motorcycle, and I love the vibration, the movement, the independence of it.

I like the way that you move in the world on them. It’s quite thrilling to ride them, there’s a physical pleasure, and it’s a great place to think and to feel… or not to think or not to feel.

Was it your early ambition to be a rock star?

Not at all. I never wanted it. I loved the sound of the instrument and then the physicality of playing it, and it became really fun, when certain friends would play with me. 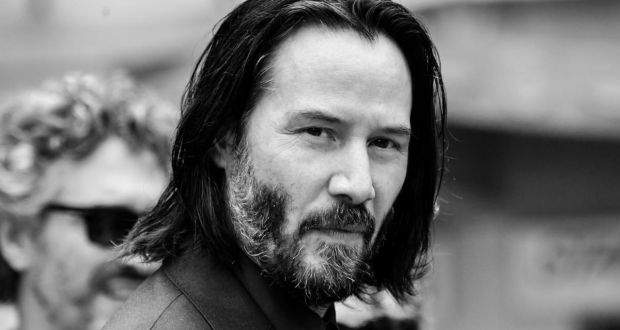 How old were you at the time?

I was 17 and I had an older girlfriend who turned me on to a lot of music. I had this car with these speakers in the back; she turned me on to bands like Joy Division, the Violent Femmes. We would get in the car, drink a little, do this or that, and I’d put the speakers on top of the car, and we’d go to a park and we’d dance.

Does music still play a role in your life?

Dogstar broke up a while ago, but we have gotten together a couple of times to play. I have a bass at home and once in awhile I’ll play with them, but it’s just for our own enjoyment.

John Wick is now a bona fide iconic action hero. Did you ever think that would happen?

Certainly for the first film we had no expectation and we didn’t think we would get a chance to continue the story. But it was the audience that fueled that. So we have them to thank.

If there were any question before, it is clear now that, despite his being a Hollywood icon, Keanu Reeves is today’s everyman whom we can all identify with.

[wp_ad_camp_5] Step just outside of Nowe Czarnowo, West Pomerania, Poland, and you'll find a pine grove known as the "Crooked…

[wp_ad_camp_5] There is a reason that dogs are labeled man's best friend. Loyal, cuddly and smart with an undying devotion…